Home » When Is The Best Time To Visit Palm Springs?

When Is The Best Time To Visit Palm Springs? 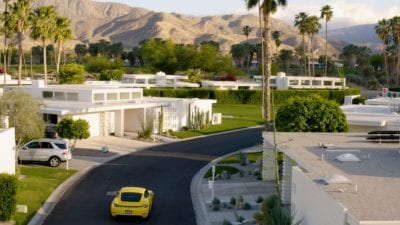 Palm Springs, the former Rat Pack playground now crawling with expansive luxury resorts, hip hotels, and home rentals, is a popular destination for golfers, spa seekers, music lovers, the LGBTQ crowd, nature geeks, new bohemians, and architecture buffs. Whether you plan a trip where the desert is the sole destination, tack it on to a larger California exploration, or take a quick weekend getaway from Los Angeles, The OC, or San Diego, the best time to visit Palm Springs is in late winter or spring although those willing to brave the desert’s punishing summer temperatures will be rewarded with cheaper lodgings and flights.

This guide to the region’s climate, festival season, and other signature events including tennis tournaments, pride celebrations, and film festivals should help you plan the ideal vacation in the greater Palm Springs area.

December is the coldest month, but that translates to an average high temperature of 69 degrees Fahrenheit and a low of 44 degrees Fahrenheit. By January, the forecast usually calls for the low 70s. In May and October, days in the 90s are still common, with some reaching triple digits. The heat drives most tourists away, especially in the height of summer, and if you can stomach (or even prefer) feeling hot, you’ll benefit from great deals and shorter lines. Remember to pack a few light layers as it can still get breezy and chilly when the sun goes down.

As with most deserts, there are occasional sandstorms. It can get very windy, hence the acres of electricity-generating windmills on the outskirts of town. April is typically the windiest month as seven or eight miles per hour gusts are normal. But when high-pressure systems move over the mountains from the coast, they can ratchet them up to 60 mph. It can move enough sand around to decrease visibility, degrade air quality, and close streets.

Palm Springs gets a majority of its annual rainfall between December and April. Although there isn’t that much need for warning as it doesn’t usually surpass six inches a year. But when rainstorms come, they have a tendency to drop fast and furious. It can lead to flash flooding and also shut down roads and hiking trails.

The climate dictates visitation. Traditionally, the tourist season hits its peak February through April and numerous signature events are scheduled in those perfect weather months. It’s a big Spring Break destination, and winter is popular with Canadian snowbirds as well. But the visitor stream is steady from November to May, especially around winter holidays (Thanksgiving and New Year’s Eve in particular) and three-day weekends. During those coveted times, expect longer waits at restaurants, less timeshare availability, and higher rates at lodgings.

It will also be more expensive to fly there and take longer to drive from Los Angeles or San Diego, especially on Fridays.

For more than a decade, the greater Palm Springs area has been home to two of the biggest, most exciting music festivals in the world. For three consecutive weekends in April, the Empire Polo Fields are taken over by Coachella, a three-day rock, hip-hop, and EDM festival attended by 250,000 people, and Stagecoach, which is basically Coachella’s country music counterpart. Ticket holders should lock down lodging ASAP as the entire desert fills to capacity. If you aren’t interested in the shows, best to avoid those weekends as festival madness is all-consuming. Even budget motels like Rodeway Inn triple their rates and easily find people to pay those prices. Brands take over pools, private rentals, boutiques, and public spaces for VIP parties and pop-ups, which can spell late-night noise and debauchery in otherwise sleepy neighborhoods. Restaurants are overrun and traffic is nasty.

Another hugely popular event on the Palm Springs social calendar is Modernism Week, a celebration of the region’s unique architecture and the desert modern/midcentury modern schools of design with home and neighborhood tours, expert lectures, and more. It’s held in February. A fall preview in October, despite being a smaller affair, still draws a significant crowd of out-of-towners and makes hotel reservations harder to score and more expensive.

Visitors who spend months under umbrellas or shoveling snow might find the Palm Springs definition of winter, well, laughable as the average high is 71 degrees Fahrenheit and the low hovers around 45 degrees Fahrenheit.

Events to check out: