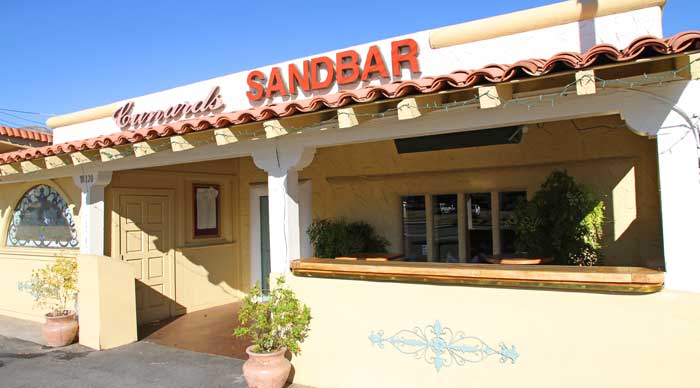 Bob Cunard, the proprietor of Cunard’s Sand Bar, is a living ‘old school legend’ here in the desert. He’s owned multiple restaurants and bars, was a top amateur golfer in his younger years and has lived a very interesting life. I believe that Bobby knows more people in the desert than just about anyone else I can think of.

From Biker Bar to Restaurant

Cunard’s Sand Bar was originally a biker bar when Bobby bought the building about 27 years ago. The joint isn’t fancy but it certainly makes up for that with character. Pete, the bartender, has been tending bar for all of those 27 years and he’s served countless celebrities and has the stories to match. Many of the servers have worked at Cunard’s for decades, too.

My husband, Bill, and I visit Cunard’s several times each year when we have a hankering for a fun old school dinner. Bobby’s son took over the chef’s duties this year and the menu has been updated. We usually enjoy one of several pasta dishes, chicken, and an occasional ‘Surf and Turf’ with a filet and king crab legs.

Cunard’s offers dinner specials most nights and is noted for old school dishes like sand dabs, fried chicken and pork prime rib. Most dinners include your choice of a small salad or soup. The food is good, the portions are generous, and the servers welcome regulars back year after year.

Patrons trend heavily on the silver side of life but younger people can often be spotted taking in the scene, as well. I often enjoy being the youngest person in the restaurant! The building doesn’t look like much from the outside, but judging from the number of high-end cars in the valet parking lot diners are well aware that there’s more to the story inside than meets the eye outside. 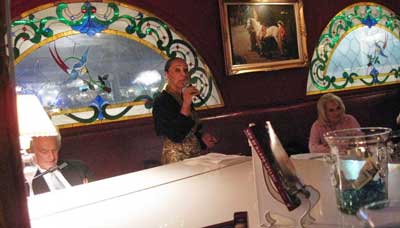 Entertainment is offered on most nights including Bill Marx on the piano several evenings a week. Bill is the son of Marx Brothers great Harpo Marx, and he certainly has some stories. Bill’s mother, Susan Marx, also had a successful show biz life as actress Susan Fleming who appeared in movies with John Wayne and W.C. Fields, to name just two. Guests famous and otherwise tend to drop in to vocalize on many nights.

As a side note, Bobby introduced my husband Bill Dettman to me when they were out for a glass of wine at the former Andrew’s in La Quinta. Bill didn’t know it, but Bobby talked him up like he was running for office!

Cunard’s Sand Bar is located at 78120 Calle Tampico in La Quinta (3 blocks west of Washington just across from Old Town La Quinta and next to Embassy Suites). Contact them at (760) 564-3660.