The one of a kind showpiece by noted designer Guy Drier at Mirada Estates in Rancho Mirage features 6,782 square feet and is a true showplace. 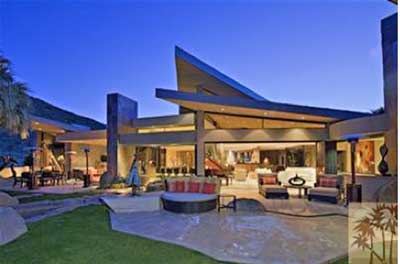 I toured this home recently and it is one of the most impressive homes in the desert. The private views over the valley floor from the Mirada hills were equally as impressive as the home, which includes numerous water features flowing off the roof.

This home was recorded as sold today in the MLS for the full asking price by the bank of $3,295,000. Why full asking price? Many people assume that the banks asking price is only the starting point for negotiations. That depends on the rest of the story behind the property and the current market trends.

The original owner had originally listed this property for sale at $4,495,000. And in a normal market and economy that is likely what the true value would be.

Over the last six months there have been less and less bank owned homes coming on the market. Part of the reason is likely that banks are getting better at working with sellers in agreeing to short sales and those properties are no longer going on to become foreclosure properties.

Banks are also pricing most foreclosure properties at just under market value. In this case this home very likely sold for under the replacement value. The buyers got the home for less than it would have cost to by a custom lot (which had sold for $1 million), pay Guy Drier for the design and then build the home over a period of 12 to 18 months.

Like many bank owned desert homes, I’m told there were multiple buyers interested in this unique property. The new owner paid the banks asking price and the others bidders are likely wishing they had.